Although full-dielectric metamaterials are low-loss alternatives to metal-based metamaterials that manipulate light at the nanoscale, there are many potential applications, but limited to current nanofabrication techniques, there have been very few reports of such materials to date. Fan et al. developed a new "nano-solid-fluid assembly" method that uses 15 nm TiO2 nanoparticles as a building block to create the first three-dimensional full dielectric metamaterial at visible light frequencies. Because of its optical transparency, high refractive index, and deep sub-wavelength structure, this full-dielectric metamaterial-based three-dimensional solid immersion lens (mSIL) can be used to produce ultra-resolution clear images of 45 nm or less under white light. Optical microscope. Theoretical analysis shows that an electric field enhancement can be formed between the contacted TiO2, which will effectively constrain and propagate the visible light on the deep sub-wavelength scale. This gives the metamaterial-based solid immersion lens a special ability to illuminate a large near-field near-field evanescent point on the surface of the object and collect evanescent information to convert it into a propagating wave. The all-media metamaterial design approach studied by Fan et al. demonstrates the potential for developing visible-frequency low-loss nanophotonic devices. (Science Advances DOI: 10.1126/sciadv.1600901) 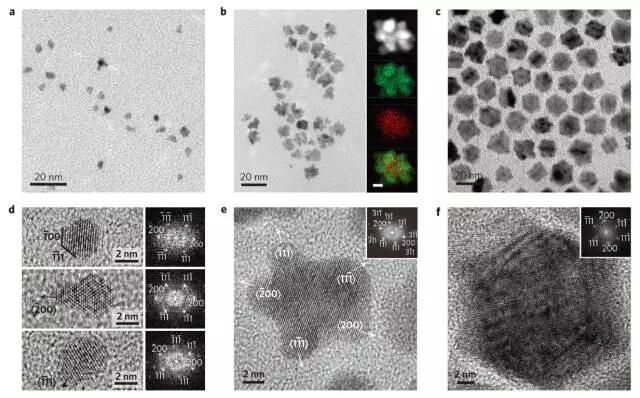 Component inhomogeneities in bimetallic nanocrystals provide additional variables for manipulating nanocrystal functionality. However, understanding how to control the distribution of anisotropic elements in nanocrystals is a huge challenge for nanocatalyst designs to reach higher levels.
Niu et al. demonstrated the evolution of phase segregation in platinum-nickel rhombohedral dodecahedrons. In the initial growth phase of the rhombohedral dodecahedron which leads to the final segregation of platinum into 14 axes, the anisotropic growth of the platinum-rich phase along the <111> and <200> directions forms a highly branched, embedded in the nickel-rich shell. Rich platinum fourteen foot structure. As the growth time continues to increase, the platinum-rich phase selectively migrates through the 14 axially outward to the 24 sides, making the diamond dodecahedron a form of a platinum-rich framework surrounding the nickel-rich internal phase. The discovery of anisotropic phase separation and migration mechanisms provides a completely new approach to the preparation of nanocatalysts based on component distribution and performance requirements. (Nature Materials DOI: 10.1038/NMAT4724) 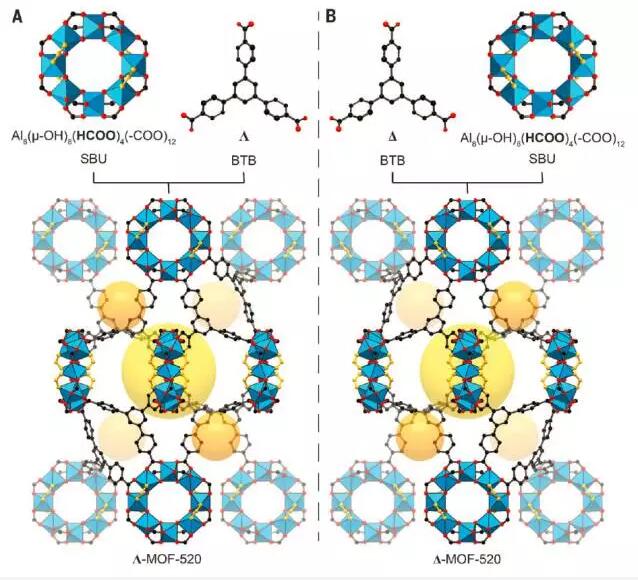 The chiral metal organic framework, MOF-520, can be used to coordinately bind and align various molecules of different sizes, complexities and functions. This coordination alignment method can effectively reduce the dynamic degree of freedom, and thus the single crystal X-ray diffraction technique can be used to determine the molecular structure. The chirality of the metal organic framework backbone can also be used as a reference to resolve the absolute configuration of the binding molecule. Sixteen molecules representing four common functional groups (primary alcohols, phenols, vicinal diols, and carboxylic acids), complex from methanol to phytohormones (gibberellin, containing eight chiral centers), crystallized structures can be Determined accurately.
Seungkyu et al. distinguished single and double bonds in gibberellin and enantiomerically crystallized racemic jasmonic acid, after which the absolute configuration was only inferred from its derivatives. (Science DOI: 10.1126/science.aaf9135) 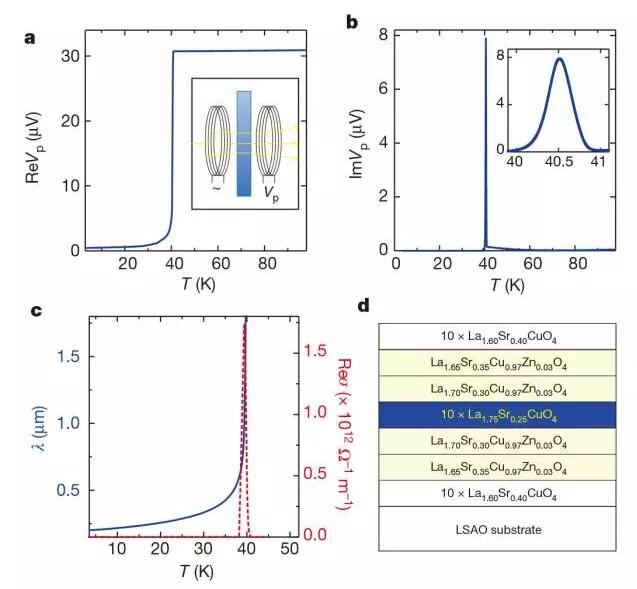 The physical problems of underdoped copper oxide superconductors, including their enthalpy gap, spin and charge ordering, and their relationship to superconductivity have caused intense debate. Frontier studies of partially overdoped samples have shown that superfluid density is much lower than expected, but this is due to coordination defects, disorder and phase separation.
BoÅ¾oviÄ‡ et al. studied the phase diagram of the entire overdoping of La2-xSrxCuO4 and found that the magnetic penetration depth and phase stiffness depend on temperature and doping. The measured values â€‹â€‹of the magnetic penetration depth and phase stiffness of the samples have a precision of one thousandth, and a large number of statistics indicate clear trends and intrinsic properties. The change in critical superconducting temperature in a homogeneous film is very small (less than 1K). The doping phase stiffness of each stage decreases linearly with temperature. The dependence of the zero-degree phase stiffness on the critical superconducting temperature is linear, but with a certain offset. However, the dependence on the origin becomes a parabola. This proportionality is inconsistent with the standard Bading-Cooper-Shriver description. (Nature DOI: 10.1038/nature19061) 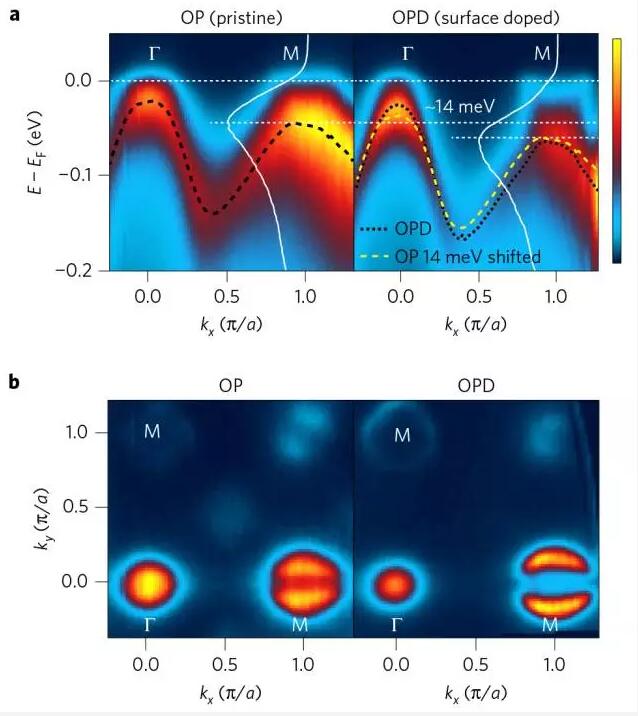 The superconducting transition temperature (TC) of a single layer of FeSe on barium titanate has been enhanced to as high as 100K. High superconducting transition temperatures have also been found in chalcogenide materials of iron having a single layer of FeSe electronic structure. This indicates that a higher superconducting transition temperature can be achieved by electron doping. However, this has been limited to chalcogenides and is quite different from iron phosphorus compounds, which achieve maximum TC by significant Fermi surface nesting instability formed by holes and electron packets.
Kyung et al. reported that the use of angular resolved photoelectron spectroscopy revealed that the surface doping increased the Tc of Ba(Fe1âˆ’xCox)2As2 from 24K to 41.5K. The results of the study indicate that higher electron doping with a topological change in the Fermi surface is very advantageous for superconductivity and is advantageous not only for iron chalcogenides but also for iron phosphorus compounds. (Nature Materials DOI: DOI: 10.1038/NMAT4728)

Effective and inexpensive catalysts required for oxygen reduction reactions have been a bottleneck for large-scale applications of fuel cells. Iron-based non-precious metal catalysts exhibit good activity and stability and are one of the alternatives to commercial platinum catalysts. However, the active sites in non-precious metal catalysts have not been confirmed, thus hindering the development of new catalysts.
Varnell et al. recently demonstrated that treatment of an iron-based, non-noble metal catalyst with high temperature gas phase chlorine and hydrogen can achieve reversible activation and deactivation of the catalyst. In addition, they observed the heterogeneity of the catalyst as the chlorine gas and hydrogen were treated by X-ray absorption spectroscopy and MÃ¶ssbauer spectroscopy. Experiments have revealed that the adjacent sites of iron nanoparticles play a major role in the activity and stability of the catalyst. (Nature Communications DOI: 10.1038/ncomms12582) 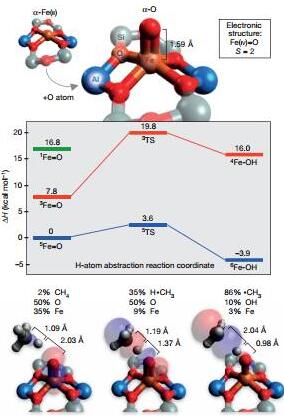 An efficient catalytic process for converting methane to methanol may have far-reaching economic implications. The iron-containing zeolite (microporous aluminum silicate mineral) has excellent properties in this respect, and is capable of rapidly hydroxylating methane to methanol at room temperature. Although the research on its reactivity has been nearly 30 years, the nature of the active site and the factors determining its excellent activity remain unclear. The main difficulty is that the detection of the reaction species -Î±-Fe(II) and Î±-O is very challenging.
Recently, Snyder et al. reported a method of site selection spectroscopy commonly used in bioinorganic chemistry to overcome this problem. Magnetic circular dichroism reveals that Î±-Fe(II) is a mononuclear, highly spin, planar square Fe(II) site, while the reaction intermediate Î±-O is a mononuclear, high-spin Fe(iv) =O species, its excellent activity is derived from a binding coordination geometry imposed by the zeolite lattice. These findings indicate that this method has important application value in exploring active sites. (Nature DOI: 10.1038/nature19059)

As a new material, van der Waals heterostructure consisting of two-dimensional transition metal disulfides has great potential in photovoltaic and photovoltaic applications. However, why the generation of photocurrent in these structures is so efficient is still an unsolved mystery.
Recently, Chen et al. obtained the exact experimental evidence of the electron transfer intermediate state in the transition from the MoS2/WS2 interface layer to the interlayer excitation using the energy-state resolved ultrafast visible/infrared microspectrometer. The free carrier migration interface The speed is much greater than the recombination rate of the excitons in the layer. This result is a good explanation of how significant charge transfer rates and photocurrents are formed. (Nature Communications DOI: 10.1038/ncomms12512)
This article is authorized by the new material online (micro signal: xincailiaozaixian), if other media need to reprint, please contact the new material online small series (micro signal)

* Steel Buildings are Rust Resistant, Fire Resistant, and Virtually Indestructible
High grade, heavy gauge steel building kits will definitely protect you from the zombie apocalypse, but most of our customers value its rust and fire resistance just as much.
And if you`re worried about the risk of fire, you can take a breather knowing steel is non-combustible.
Unlike wood sheds or workshops, prefab steel buildings are fire-resistant and won`t feed a fire should one spark nearby.

* Steel House are Easy to Build Even if You Lack Tools, Skills, or Muscles
As long as you have a few friends, coworkers, or begrudging family members for help, you can build your prefab metal garage or shed in a few days.
We typically despatch our steel building kits within a couple of weeks - and in many cases quicker - so you can get right to work.
You don`t need to hire any special labourers, rent any expensive lifting gear, or even beef up your power tool collection to make one yourself.


All you need is an existing concrete pad or a floating foundation to get started.